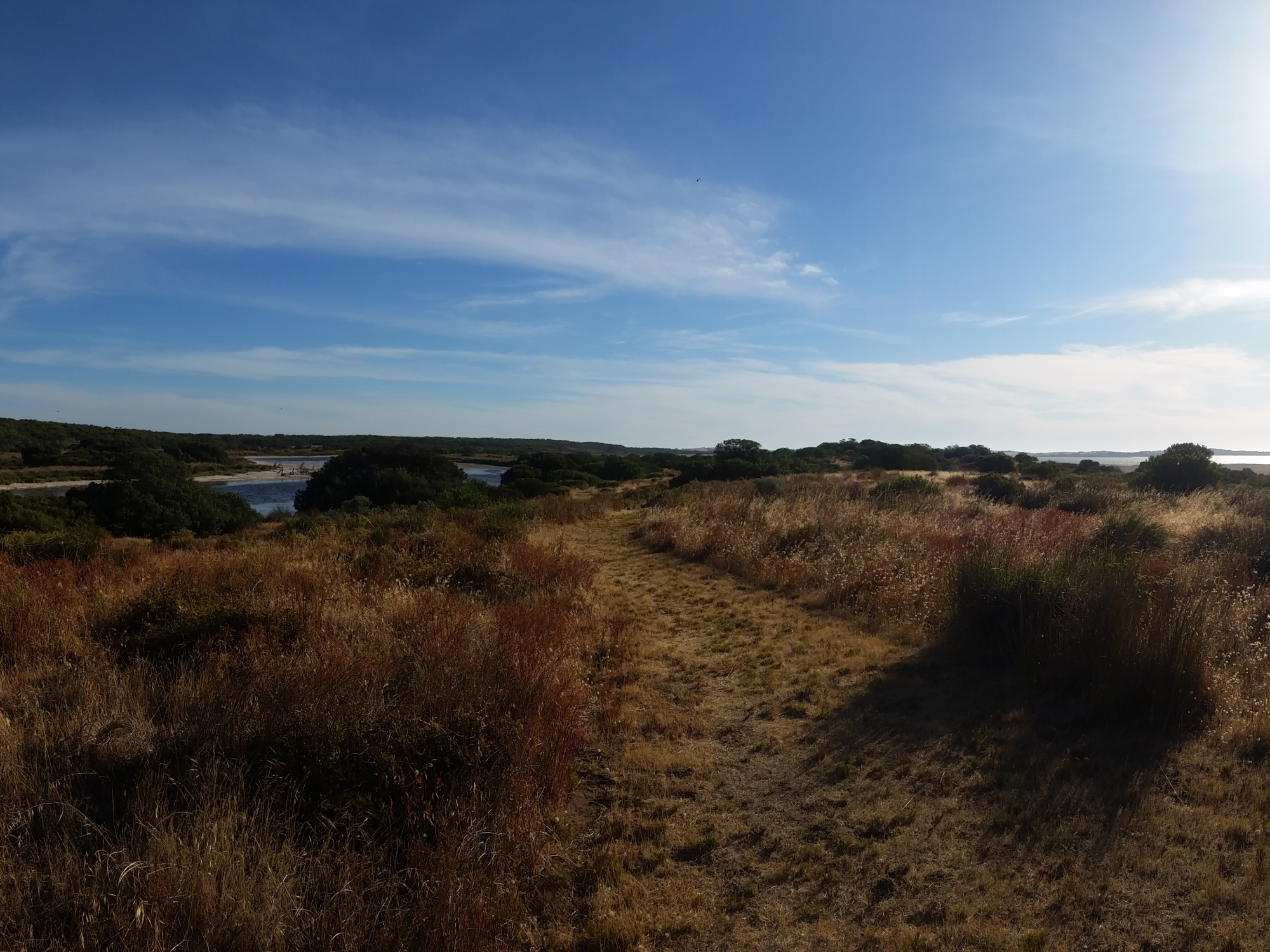 The Ride and Sights 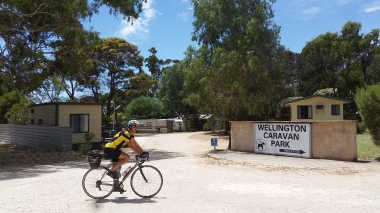 Beautiful day for riding, mostly on quite minor roads including about 10km of dirt near Clayton Bay. The scenery of the Coorong is magnificent, such a variety of colour and vegetation. The vineyards, featuring since Clare on the other side of Adelaide, stopped during this stretch of the journey as suddenly as they had started (with the exception of the city of course!) 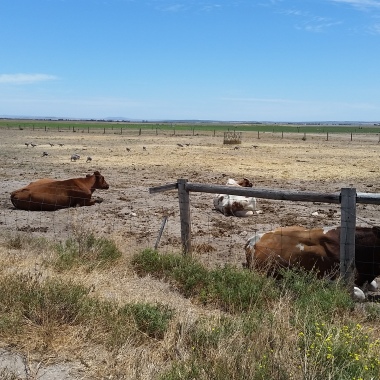 My rest stop was the delightful little village of Milang where protection of the local tortoises features. Along the way there were several old farmhouses, and in one shed, a fantastic olden days truck.

The last part of the ride was along B45 which seems to have an identity crisis being known as both Langhorne Creek Road and Wellington Road. Wellington is situated on the Murray River at a ferry crossing and is very picturesque, particularly impressive is the old court house, complete with original gaol cells, and is now a café featuring free homemade lemonade – it was so refreshing after the day’s cycling. 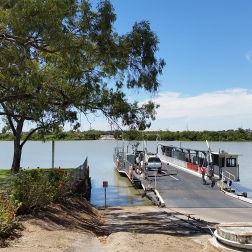 After lunch Miranda and I caught the ferry, which is free, across the river and rode to the local botanic gardens (Pangarinda)
that has been 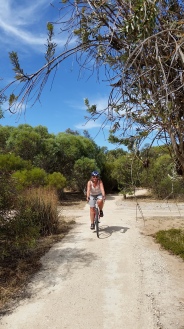 established by the Lions Club in an
endeavour to conserve threatened flora. What a fantastic job they have done turning a sandy waste land into an impressive collection of native plants from WA and SA. Their priorities are the species from the highly modified drier agricultural regions of southern mainland Australia.

Being Sunday morning Miranda remembered the suggestion we contact Macca on Australia All Over that someone had mentioned so she got on the phone – a bit late, the show was nearly over. However, they were very interested and put her through for a quick chat to spruik our adventure  – did you her her? Another pleasant day’s ride though with a bit more traffic as I was on the Princes Highway all day. It is next to the waterway for much of the time providing magnificent views of the Coorong scenery. The shoulder was nice and wide, so I felt safe, however it was incredibly rough at times and the bike and my body sure got a good shaking. I stopped for a break at a rest area, speaking briefly with European gentleman who was off to go fishing and who proudly showed me his homemade dash cam put together with masking tape. I arrived at the Heart of the Coorong Roadhouse in good time and ahead of Miranda so read the infographics about the failed attempts to drill for oil in the area. 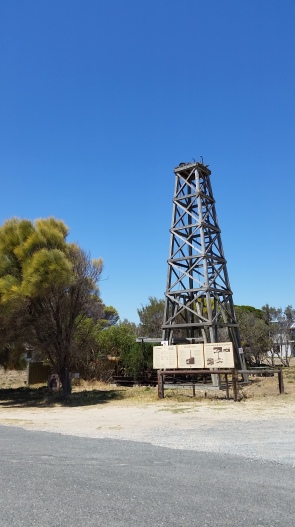 It seems someone had found some oil like sludge on the ground which was mistakenly thought to be dried up seepage from a subterranean source sparking an oil rush. Turns out the sludge had been produced by some sort of specialised algae (or was it bacteria?)!

In the afternoon we decided to explore the surrounds as we had both been stunned by the amazing scenery of the Coorong. Across the road from our campsite we found a signposted walk through the bush around Salt Creek – it was incredible, and we spotted wallabies, emus, black swans and other bird life and what we think was a dingo! There was even a memorial to the loved children’s author Colin Thiele – we suspect he was inspired by the area to write the famed Storm Boy story by this amazing environment.

Day 50 Heart of the Coorong Roadhouse to Cape Jaffa

Most of today’s riding, as I said goodbye to the Coorong, was again on the Princes Highway however the quality of shoulder had improved markedly and I was not shaken up nearly as much as yesterday. I stopped off at the Chinaman’s well and marvelled at the endurance and ingenuity of the many Chinese that passed this way in search of gold in the 1850’s. I left the Princes Highway at Kingston SE and after admiring the Cape Jaffa lighthouse which has been re-erected in the town after being replaced with a modern alternative in the 1970’s, headed down a lovely quiet and scenic road to Cape Jaffa. 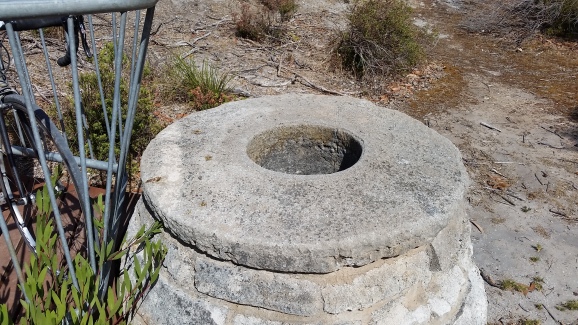 We got up early so that we could walk along the beach to the old lighthouse keeper’s cottage, long since deserted. It was a gorgeous morning, the walk refreshing and the cottages created interesting ruins. 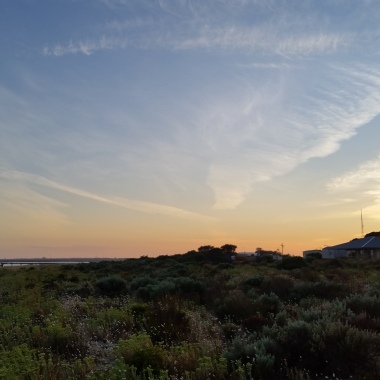 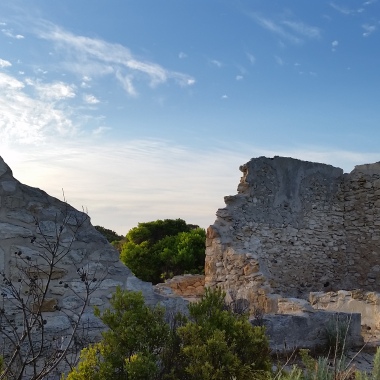 Strong favourable breeze today made for a very quick trip down B101 (Southern Ports Highway) with a good surface and very little traffic. The lock the gate campaign is big in this area and my stop was the delightful little seaside town of Beach Port which featured a sculpture of a cyclist made entirely from driftwood.

Millicent is inland and I was surprised at how quickly the temperature rose as pedalling away from the coast and was delighted at the towns incredible swimming lake located adjacent the caravan park. It is absolutely huge, provided without charge and was such a refreshing cool off from the 36 deg C day.

Change of wind direction today and more dirt on my chosen route made for heavy going on the way to Victoria. I passed by the delightful town of Tantanoola, a huge windfarm installation and Little Blue Lake where a teenager had been working up the courage to jump from the rather high cliff face into the water. I pedalled away not knowing if he had jumped or not. 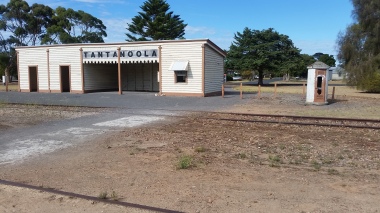 I met Miranda at Mt Schank and we climbed to the top of the extinct volcano and walked all the way around the crater rim. The path up has recently been upgraded with lovely limestone blocks and there was a huge local controversy as someone had ridden a horse up the path damaging many of the blocks.

We changed our plans to camp at Lake Surprise today and instead elected to finish at Coleraine, a once thriving town now very much in decline to the north east (and up some hills – I need to train for Tassie). I decided to ride through the Lower Glenelg National Park on a limestone road which was incredibly tranquil with the forest providing cover and shade and not another person on the road. The surface was excellent for the first 10 km’s then deteriorated rapidly making the second 10 km’s very challenging. The rest of the route was on peaceful single lane country back roads through native forest, pine plantations and eucalypt plantations. 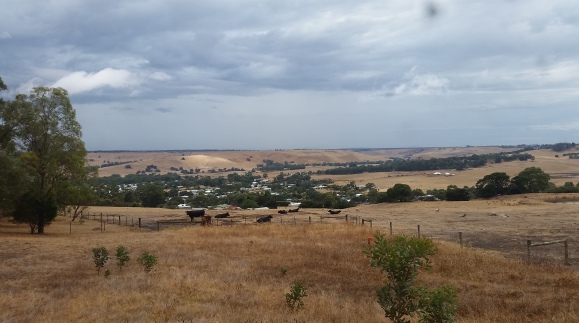 Coleraine is in a valley surrounded by plains and the end of the ride was a lovely downhill run to the small council run caravan park in the middle of town.

As the Tour de Tasmanie is less than a month away I thought I had better do a longer ride today to help with my preparation for what is going to be an incredible challenge. I plotted out a 245 km route and had intended to leave at 6:30 am to be sure of finishing well before sunset. Today, of all days, it was raining so I delayed my departure by about an hour in the hope it might ease, which it did only slightly. Once again I managed to include some dirt on my route, though completely unintentionally this time. The rain made the 15 km of dirt very difficult and I smiled as I went by a ‘dry weather only’ sign.

A sigh of relief once I was back on the bitumen of more peaceful single lane country roads. By lunch time the Grampians came into view, the rain finally stopped and there were occasional periods of sunshine on my way to Mortlake. From Mortlake it was time to head south west back to the coast towards Yambuk our destination for the evening and rest stop for a long weekend.

People along the way

We meet new people every day and we are constantly finding that Australia is full of generous, supportive and interesting people.

When we were at Wellington Caravan Park we met the wonderfully engaging couple, Red and Rob (actually Robin and Robyn, but they prefer to go by the simpler monikers). They were driving a hot rod towing – you guessed it – a teardrop! Their’s was varnished timber and looked fabulous. Naturally we got talking and compared notes – they were a hoot.

At the Heart of the Coorong Roadhouse, which is a pretty out of the way camping spot with fairly basic amenities we were overwhelmed by the generosity of a young Swiss couple who gave a large donation. Another traveller, Duncan, formerly of the UK also donated to our cause – thanks so much all of you.

At Cape Jaffa we were once again given a reduced rate by the Caravan Park, and one family gave us some freshly caught and cooked garfish – great for me, not so much for Steve!

On to Millicent where the new caretakers were working at reviving the park after it had been allowed to rundown. They also discounted our stay and gave us extra free data to use during our stay. We met Cathy and Rick who had heard us on Australia All Over and came over for a chat and make a donation.

It was exciting to cross the border into Victoria and what a welcome we got! The lovely owners of Kywong Caravan Park at Nelson not only made a donation, they gave us an ensuite cabin for the night – fantastic! Cannot tell you how welcome that was, much as we love the pod, it is nice to have a bit more room occasionally. Brett and Del, we salute you and thank you from the bottom of our hearts! They had both been touched by cancer in their families and just wanted to be supportive however they could be. 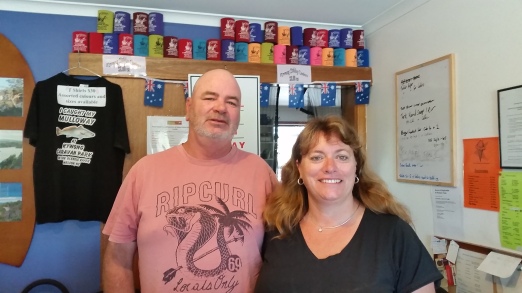 Next stop Coleraine, and as Steve mentioned, a rather sadly rundown town. But again, a wonderful and supportive welcome from Michael and Sandra who run the Post Office and take the caravan park fees. When I arrived they were really interested in what we were doing and told me all about the town and its history, giving us ideas of where to visit and highlights of the area. When I took back the key they had a donation for us and Michael was going to raise a motion at his next Lion’s Club meeting to support us. In addition, when I got stuck with a problem in my car, Michael came to help out – a really wonderful couple that we were so pleased to meet! Also a huge thanks to RACV Hamilton who fixed the car door seatbelt problem (see below) free of charge. 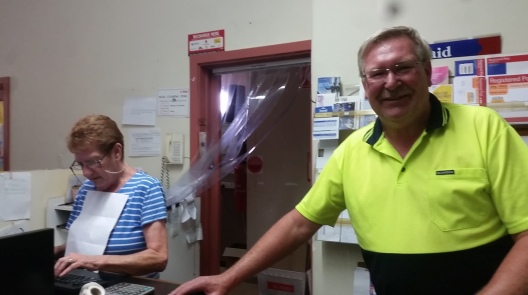 Final stop for the week, and four nights to take it easy and recover from what had been a pretty hectic week (I have neglected to mention the dramas of my trip from Coleraine to Yambuk, but let me say it was a case of ‘it never rains but it pours’ – the day had started with rain as Steve mentioned and it set the scene for a rather dramatic set of occurances that involved mud, ants, vans requiring some womanhandling, stuck car door with seatbelt caught…a day to be forgotten!) Again an amazing welcome – a free campsite for the duration of our stay and a warm welcome from owners Ev and Trev. Sometimes we just don’t know what to say except, thank you Victorians, you have been terrific!

That’s enough reading, now here is the stuff that words cannot say :). Rain prevented me undertaking the work for Coleraine but it will be done soon – will post an update.

Itinerary for this week