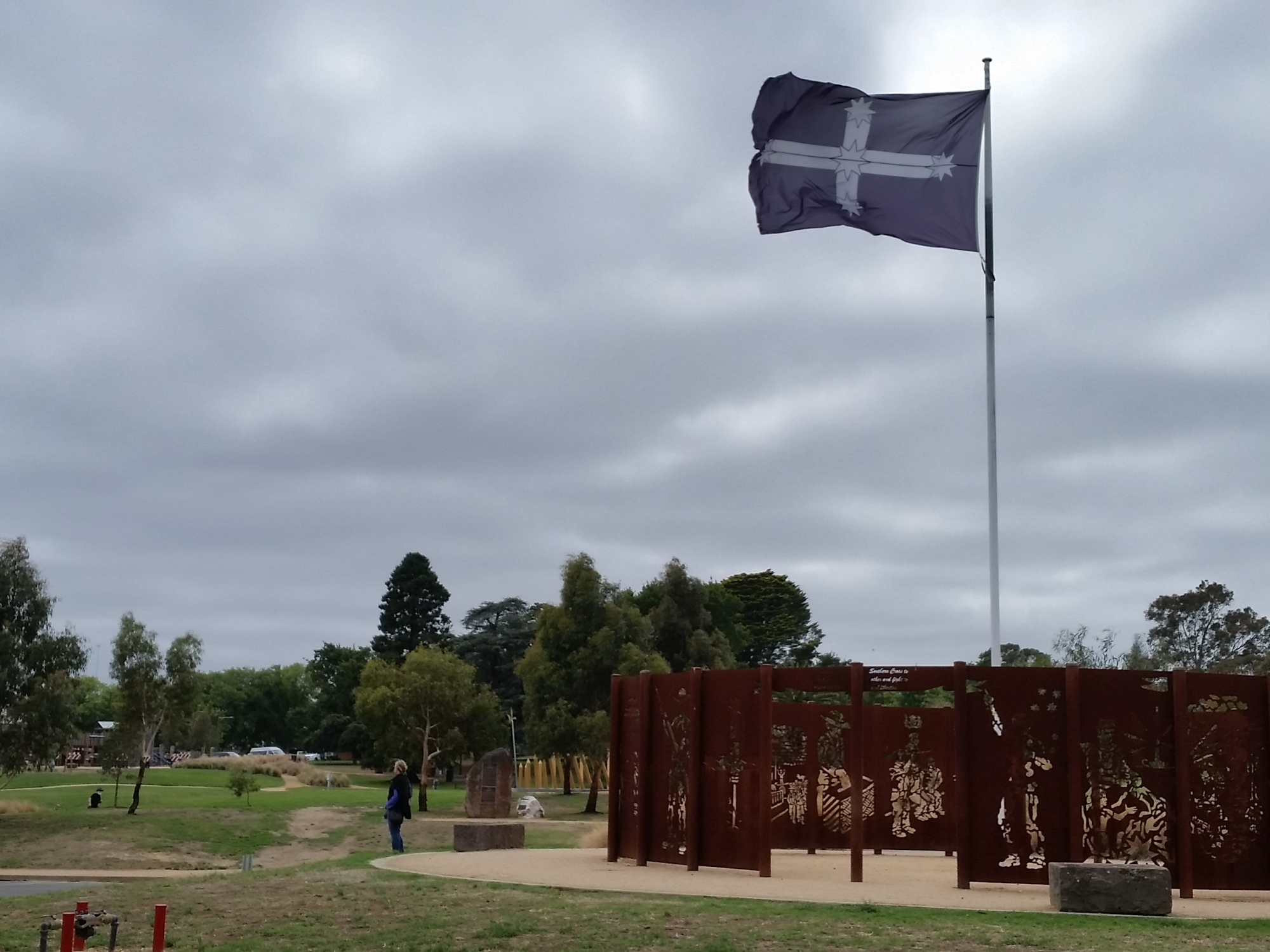 Note: We have taken a bit of break from blogging and hence you are getting two weeks in one here – we needed to refresh and regroup. Also our tour of Victoria was a mix of driving and cycling for Steve, and was sandwiched between a few days in Melbourne either side. I slowed down on my art making too, lost my mojo a bit, I’m sure it will return soon!

The Rides and Sights

After a wet night we got up early to pack up in preparation for our trip to Melbourne and a few days rest. While Steve set off to ride back across to the bay side of the Peninsula, I drove around the corner to where I had taken a wrong turn the day before, and where there had been a recent fire (another one..) as I had decided to document a burnt landscape in sanguine, black and white conté chalks. A rather quick sketch before heading off to Parkville, Melbourne to stay with cousin Natalie in her newly renovated townhouse. While the distance was similar to other days, it took much longer than usual to arrive being in a metropolis. In the end Steve and I arrived within half an hour of each other early in the afternoon, in good time for Nat and I to head off for some pampering at a local day spa – me because I’d spent two months on the road, Nat because she just started a new job.

The rest of our stay in Melbourne included fun things like meeting with my former boss Melissa and family at a Brunswick St eatery, attending an egg tempera and guilding workshop (M), visiting other family and cooking up gourmet feasts as well as the more mundane domestic tasks such as washing, pod repairs and bike maintenance (S).

We had lovely mild and mostly sunny weather while in Melbourne, but on the morning we were leaving for Ballarat we awoke to a cold, windy and rainy day. Wisely Steve elected to join me in the car which made for a pleasant change for us both for the journey to Ballarat. Steve is going to be riding in the Tour de Tasmanie (1200 km, 90 hr time limit…Audax madness) and part of the preparation is to be sufficiently rested as well as sufficiently bike fit, so he had already decided that some of our internal Victorian loop would be a driving rather than riding tour for him. 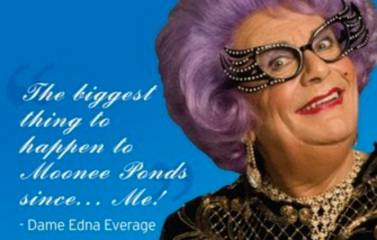 (Dame Edna’s stamping ground), Bacchus Marsh (of the recent salmonella lettuce outbreak) and Daylesford, a lovely spa town with churches, wall to wall galleries, homewares shops and delicious eateries as well as a beautiful botanical garden. We lunched there before heading on to Ballarat to stay at the amazing Wyndham resort that is a heritage listed house from the 1800’s. The room was so luxurious, and the grounds so inviting with heated swimming pool and spa/sauna facilities that we decided that we should stay another night and explore Ballarat at our leisure the next day.

Of course we had to visit the Museum of Australian Democracy at Eureka (MADE) where we could view the original Eureka flag – very impressive, and sample some aboriginal Australian herbs and spices in the cafe. We also visited the gallery that was housed in one of the many beautiful buildings in town before retiring to the resort for swimming and spa-ing: life is tough sometimes :).

As the weather had cleared up nicely with ideal temperatures and favourable winds I was excited to get going especially as for more than half of the day I would be riding on the Skipton rail trail.  The Ballarat-Skipton rail trail did not disappoint, the surface was superb, the scenery magnificent and the highlight was the spectacular Nimmons Bridge. 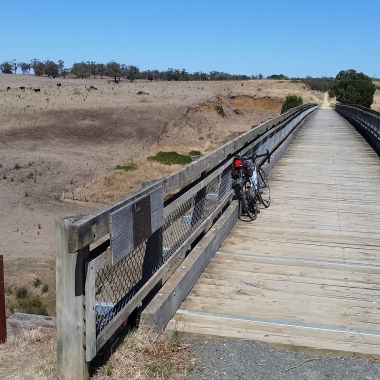 After arriving at Skipton I proceeded down B160 to the delightful Lake Bolac Caravan Park where Lorrainne and Frank very kindly donated a powered site for the night, ice for the eski and naishi fruit from their tree. 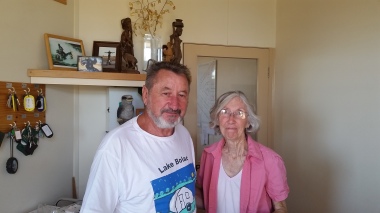 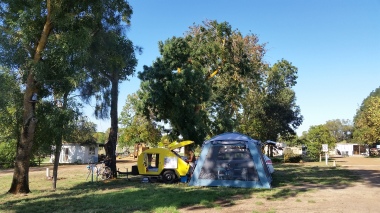 Another fantastic day for riding with quite roads and beautiful scenery as I ascended  the Grampians from Dunkeld in the south to Halls Gap in the north. It was good to get a bit of hills training under my belt with the Tour de Tasmanie coming up quickly. 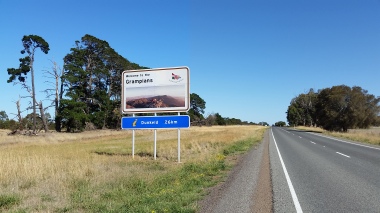 After we set up camp in the huge Halls Gap caravan park we drove and walked to the Silverband Waterfall. The walk was peaceful, the bush impressive and the waterfall was waiting for rain :).

We also looked in on a private gallery – turned out to be the studio of a well known wildlife artist, Steve Morvell. He works mostly in chalk pastels though when travelling he does pen and ink with watercolour in his journals. Worth a visit if you’re there, and the outlook is spectacular across a wet land with the beautiful Grampians as a backdrop.

We decided on a meal out at a local cafe before returning to the pod which was rather lonely in amongst the massive trees that partially blocked the incredible rocky peaks that surrounded us. Being such a large caravan park there was a lot of space and we seemed to be left to enjoy the park in peace.

Day 70 Drive, Halls Gap to Echuca via Brim and Quambatook

Next morning before setting off for Echuca and while Miranda was painting I walked to the top of one of the nearby hills, Chatauqua Peak. The views were magnificent. However, I now pass the baton back to Miranda to continue the story…. 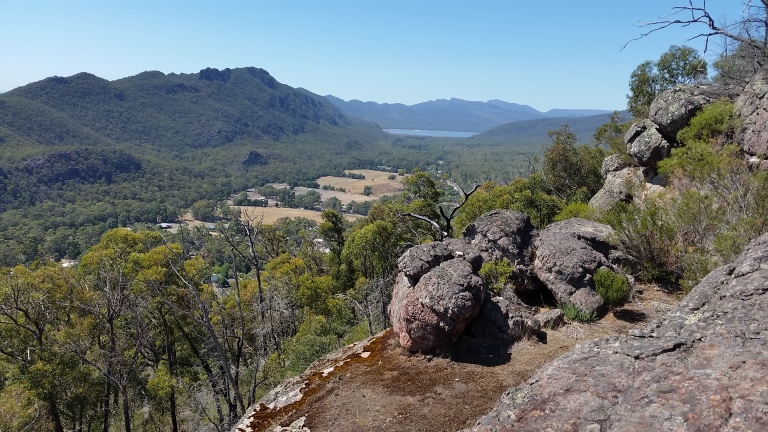 Since Steve was having another break from the bike we decided that we would traverse a greater distance today and check out a few significant sights. First on the list was Brim, a very small town but has recently come to notice due to a fantastic mural that was painted on some wheat silos. Brisbane artist, Guido van Helton, spent the end of 2015 and early 2016 creating this impressive outback masterpiece that represents typical country characters – it is a sight to behold!

We continued on our way, now heading for Quambatook where my father was born 90 years ago (1926, same year that the general store was built!) – he was the first son in a local farming family that lived in nearby Lalbert and where there is even a road with our name (Free Rd). On our way we passed through the strangely named town of Birchip…we couldn’t work out how to pronounce it – any suggestions? 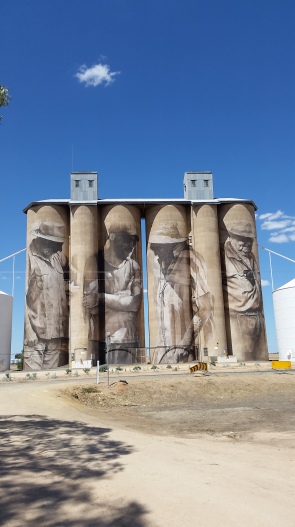 The countryside in this area was very dry with short stubble on the field after field we passed, occasionally we spotted sheep, but for the large part it was uninspiring landscape so we headed for the Murray where we hoped for greener pastures. We were correct and were rewarded with a much more lush environment as we approached Echuca and another rather large, and fairly empty, caravan park. It was situated right on the river bank and near to Echuca Port so we ended the day with a pleasant stroll looking at the old steam driven river boats.

(Steve) Sometimes I let ‘ridewithgps’ select the route between two given points for me, and it never fails to deliver rather interesting choices. The ride to Bendigo was no exception and while I generally don’t mind a few kms on dirt roads or tracks I did not want to spend all day being vibrated to pieces. So when the route turned to dirt on four separate occasions, I retraced my pedal strokes and arrived in Bendigo with an unusual zero kms of dirt for the day. The scenery, as you can see below, was mostly very dry agricultural land.

The day was warm, the ride exhausting so after setting up the pod in the caravan park we cooled off in the pool while chatting with our neighbours for the evening, Val and Terry. They have spent five and half years travelling Australia in their caravan, and their comment about this was: “Retirement IS all it’s cracked up to be!” They have settled back into a more everyday existence now, but still take off in a smaller van for shorter trips when the whim takes them.

(Miranda) Another touring day with my beloved companion – yay! We spent the morning in Bendigo where we had to check out the ‘Marilyn’ statue that towers over the entry to the lovely central gardens near the gallery. We missed the Marilyn exhibition, but enjoyed a visit to the gallery anyway, as well as wandering the beautiful gardens that adjoin the Chinese gardens and museum. Then back on the road to see Castlemaine where we enjoyed lunch in a cute place called ‘Run Rabbit Run’ before zig zagging our way through spectacular forests around Daylesford, Blackwood and numerous other small towns. It was a nice change from the dry country side of the previous couple of days, and meant we could avoid tollways on our way back to Melbourne where we were welcomed back by Natalie and son number 2 Ben, who cooked up a fabulous Asian meal for us to enjoy – fantastic! 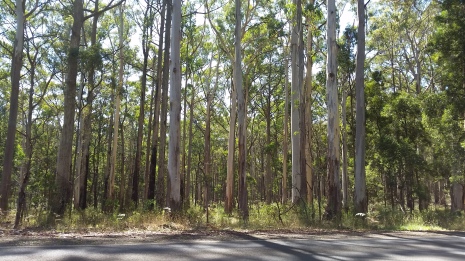 A quiet couple of days kicking back in Parkville as we prepare for crossing the Bass Strait and Tasmania. I am pretty excited as I have not yet been to Tassie so am looking forward to seeing another state – and the beautiful environments it offers, despite the 73 fires savaging the place currently! Once again domestic chores were a feature, but we did fit in a short cycle into Southbank to meet up with some friends for morning tea and an afternoon in Kensington bar and tattoo parlour ‘Lost and Found’ where we ate the most delicious eggplant chips with tomato relish – mmm! Somehow we managed to take NO photos…so the best I can do is add an old portrait of my dear cousin Nat xx. Tomorrow we catch the Spirit of Tasmania to Devonport – whoo hoo!

Not so much this time. My project is “Australia every 100 km” so I’m not doing a work everyday when we stop, and I lost my mojo a bit lately. Also missed some days due to rain or lack of motivation…I’m missing studio time a bit, but will catch up a bit when I have over a week in Hobart. In the meantime, here is the selection from the last couple of weeks.

However, we do now have postcards available for the Nullarbor series shown below – $18 for a set of 12 including p&p – if you want to purchase a set email me at miranda14@westnet.com.au for details.