Disaster! The Enigma was stolen during the night, as was another cycling group member’s Giant. I noticed it missing when I got up early (about 5am) stuck my head in the pod and firstly asked Miranda if she had moved it (optimistic) then went to report to police just across the road. It was a Monday public holiday in Victoria, so emailed local bike shop and cycling club for assistance as couldn’t visit them, and embarked on a Facebook campaign including paying for increased post reach. Phenomenal response with many people sharing post – thanks for that.

Nothing more could be done so prepared the spare bike (Specialised) with basic puncture repair kit and headed off down the Bairnsdale Orbost rail trail. Magnificent wooden bridges to view though not cross on the way – they are unfortunately unsafe so the trail has some short sharp descents and ascents in lieu of crossing bridges. I met Miranda at Bruthen’s Bullant Brewery, couple of local beers for me, Miranda working on an oil painting of the view from the brewery balcony (there was a bit of rain about). 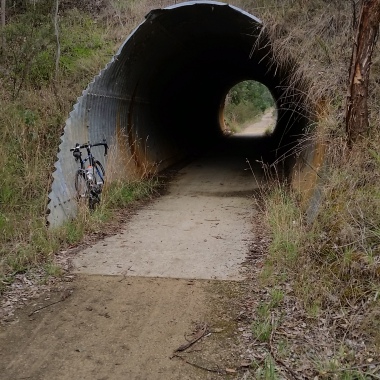 Back on the rail trail, very soft patches of sand in places kept me on my toes and the surface deteriorated as I approached Orbost becoming very rough for quite a few kms. Passed the longest wooden bridge in Vic just outside of Orbost, almost 1km long across the Snowy River flood plain. Crossed the Snowy River and arrived at the delightful Orbost caravan park just before Miranda. Greg was extremely friendly and very good fun as we bantered with Jason and Sheena about interstate rivalry.

No charge for our powered site, thank you so much Greg and Orbost Caravan Park.

About 6 that evening I got a call from Bairnsdale Police advising they had found my bike, a bit worse for wear and missing accessories. Great news. Drifted off to sleep with the sound of light rain – made heavier on the roof of the pod by the overhanging tree!

Up early to drive to Bairnsdale to collect my bike and received a phone call just as I passed Nowa Nowa. It was Bairnsdale Police saying they would deliver the bike to Orbost as they had some business to attend to in the vicinity, woo hoo. Received bicycle from Leading 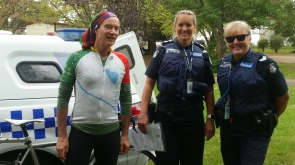 Senior Constables Sharon and Toni, delivered to our camp site in Orbost – proactive policing at its very best. After my delayed start I headed off to towards Cann River with a diversion through Marlo which is the coastal town where the Snowy flows into the sea and it is just beautiful. The skies were overcast, temperature was pleasant and the scenery was lovely. Miranda sketched some trees in the campsite at Orbost and passed me quite early in the day. Her text an hour or so later described the road conditions on the Princes H’way ahead perfectly, ‘quite variable with shoulder etc and quite hilly. Also wet past Bellbird creek….’.

I arrived at the Cann River camp ground at about 4:30 where Miranda had already set up everything and was waiting on the road (thanks to the spot tracker) to photograph my arrival. Cann River rest area is a delightful spot to stay right next to the river with lovely shade trees and lush grassy sites. We walked into town across the bridge, had a drink at the local and headed home for dinner and sleep…no rain overnight. 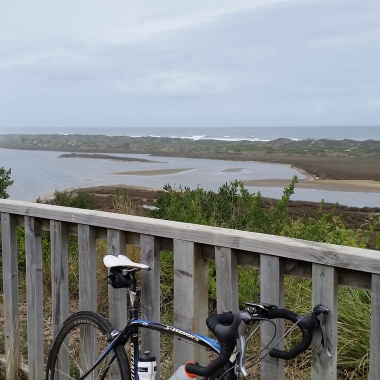 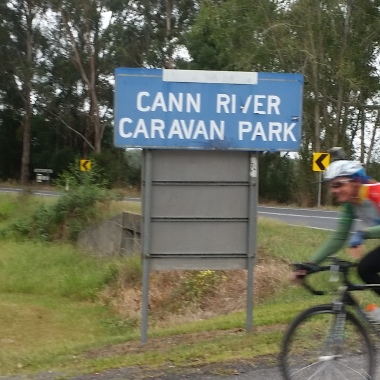 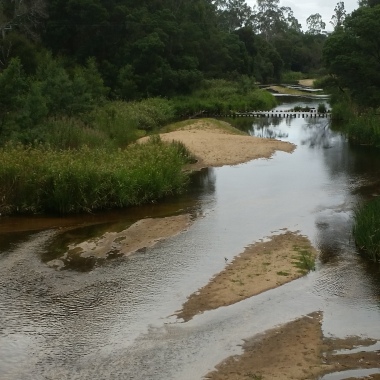 Lovely sunny day to set out after Miranda had scoped out a suitable spot for her water colour of the Cann River.

Still on the Princes highway as far as Genoa and the conditions still variable, shoulder comes, shoulder goes though regular signs inform of millions being spent on the Orbost to NSW border section of A1. Quick stop at the Genoa pub for a softdrink before riding the 23 kms down a lovely windy and hilly road to the very picturesque Mallacoota, just beating the rain.

There was several caravan parks to choose from, however I selected the Beachcombers, mostly because it looked neat appeared quiet & small, was close to the shops and had a camp kitchen with open fireplace. Proprietors Paul and Debbie were very friendly and sadly had an 8 year old nephew, Alex who had died from brain cancer. He gave us our powered site for the evening free of charge and in memory of Alex. Cooked up a vegie curry in the camp kitchen with a lovely open fireplace which was being used by Paul, Debbie and a few other guests to cook up a lamb and vegie stew in a camp oven. We all ate together in the camp kitchen chatting about our various travels and how good it has been owning and running a caravan park in Mallacoota for the past 18 years. 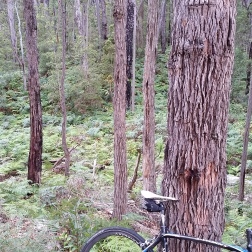 We woke to another lovely sunny day and Miranda and I went for a short cycle on the path around the lake, beautiful scenery, great path with boardwalks and magnificent views.

Left Miranda doing an acrylic of the lake while I pedalled the 23km back to Genoa then headed north towards the NSW border and Merimbula (our intended stop for a couple of days). The A1 improved significantly after crossing the border with a decent shoulder on the road all the way so far. The day grew hot so I kept moving and took a diversion through a wetlands trail at Pembula before riding on to Merimbula to wait for Miranda. Unfortunately all the caravan parks in Merimbula are large family oriented places with jumping pillows, TV/movie rooms, heated swimming pools etc – not really our scene so we back tracked to Pambula and decided to stay at the very comfortable South Coast Holiday Parks camp ground. 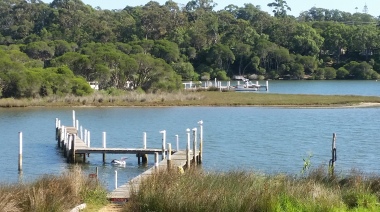 Woke to rain on Friday, though just a gentle sprinkle, ideal for our rest day and to catch up on blogging, washing and other stuff. However, during the day a brief but very strong squall swept across the town and broke shade tent (again!); fixed it with Gorilla tape while Miranda went to check out the galleries, so not too much of a disaster!

Another glorious day for a ride, mostly away from A1 following the coast through Merimbula, Tathra (historic wharf), Bermagui and finishing on a lovely cycle path that went right to the Dalmeny caravan Park. Managers were fantastic, donating our camp fee and organising a special fund raising morning tea for the next day…..Also met Southerly Busters, a caravan club group who were very friendly and supportive that made us welcome for happy hour around their campfire, donated $100 from the group presenting us with a cheque after drinks as well as individual members supporting the cause. After a magnificent sunset, dinner had an early night. 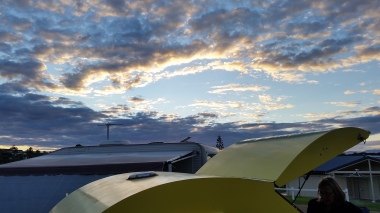 Quite a long day today so I left before the fund raising morning tea and headed down A1 which was my route for the whole way to Ulladulla except for a small Garmin driven diversion down a dirt road……clear skies becoming cloudy, good road conditions with nice wide shoulder.

The morning tea organised by Val and Mary in the camp office was a raging success! Home cooked slices and cakes were provided, around 50 of the campground guests turned up to support us with many making a donation, or buying merchandise and postcards. It was a lovely morning (apart from an unplugged power cord getting snapped when Miranda forgot the daily routine!) 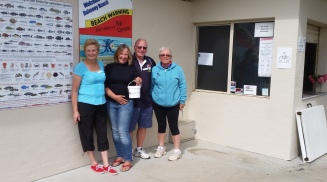 missioning the new plant back in 1979. Meanwhile Miranda found a Bunnings en route to get a new plug to repair our essential power cord! After that she drove to her Auntie Gwen’s place in Ulladulla where she caught up on family gossip and remet her cousin Rae (after at least 30 years) and her son Nemo who was pretty young last time she had seen him and now had children of his own. I met up with Miranda at Gwen’s, meeting yet another branch of her extended family…our travels on the East coast are being characterised with much reconnecting with relatives and old friends.

At the lovely headland caravan park in Ulladulla, Col, a brain cancer survivor of over 20 years, welcomed us warmly and gave us a discount on our powered site for the night. We had a wander around the bush paths around the headland providing lovely view across the beach.

Overcast with a bit of rain, again mostly on A1, crossed the Shoalhaven (last NSW river we had to learn in primary school). Raining cats and dogs at Werri beach. Miranda stayed behind as usual to start on an artwork – she just got the basics down before heading back to see her Aunt Gwen again for a cuppa and a chat.

An obligatory selfie and she was on her way to meet me at the huge, but somewhat deserted, caravan park at Werri Beach near Gerringong. Again we were spending a couple of nights here before the final ride into Sydney where we would be spending a bit of time and meeting up with daughter Katie who was flying in from Perth to see us. 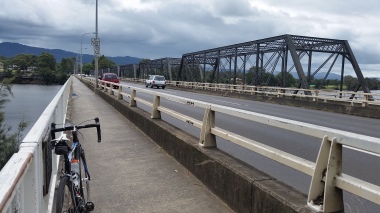