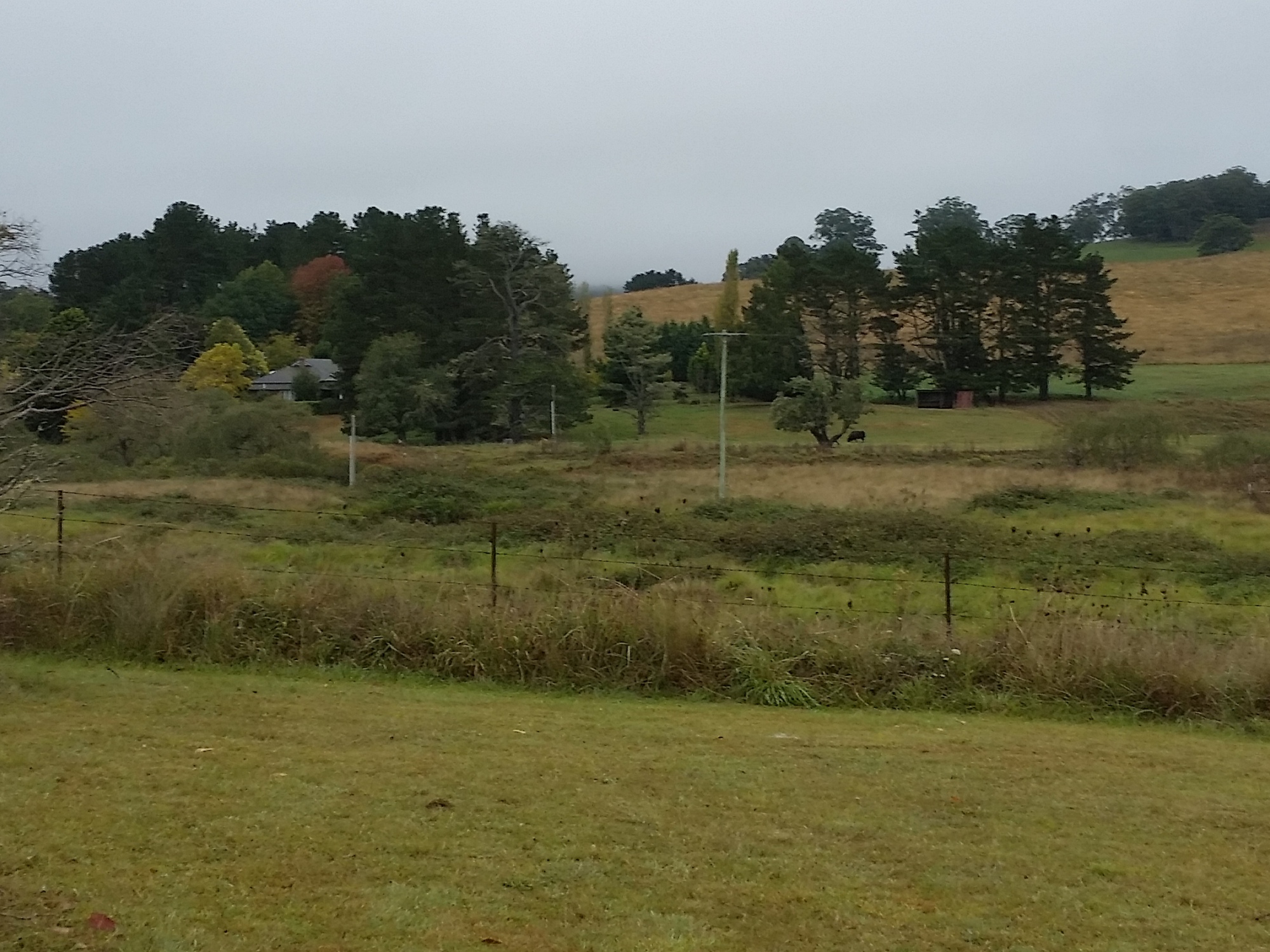 I departed Gosford on a beautiful sunny day, very pleased to be back on the Enigma which had been repaired in Gosford with parts I had arranged to be shipped to sister Joanne’s place. 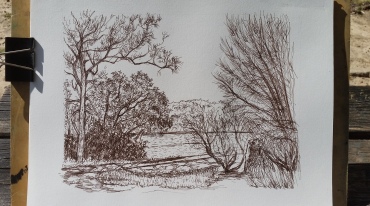 In the meantime Miranda remained in Gosford for a few hours working on a pen and ink drawing of Fagans Bay near the Finn Inn, West Gosford.

Once again I let the Garmin GPS direct me out of Gosford and once again it delivered me to the road less travelled – only this time I wound up walking through a thigh deep swamp to gain access to a very rough railway maintenance road. 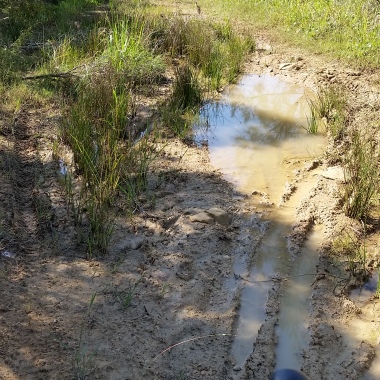 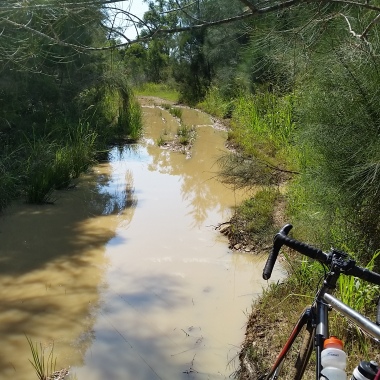 After a few kms I was back on good bitumen heading for the first stop of the day at Cooronbong, HQ of the Seventh Day Adventist Church and home to the Weetbix factory. Not long after I arrived Miranda joined me and we enjoyed a coffee and sandwich before moving on to our destination. The day warmed considerably during the afternoon and it was a relief to reach the Nulkaba caravan park (near Cessnock and in the heart of the Hunter Valley) and cool off in the swimming pool. 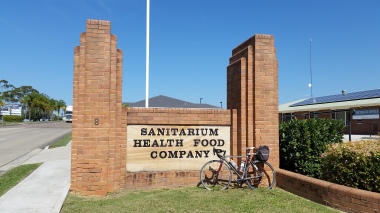 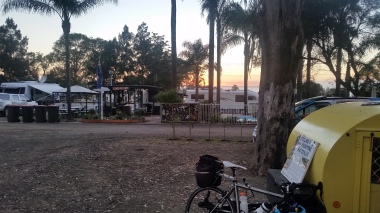 I set off on another cloudless day with my route taking me away from the New England Highway and down some very pleasant, peaceful dirt roads while Miranda captured some fields of grapevines with her new slower drying acrylics (Golden Open). 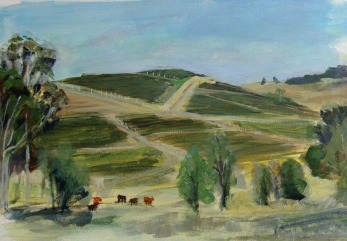 We passed through Rutherford, crossed the Hunter river and wound through verdant farmland before a sign reading ‘warning, coffee ahead’ had the desired effect and I stopped briefly at an enterprising woman’s new business which had been set up in a small shed in her front yard. She made an excellent cup of coffee and squeezed a fresh orange juice all provided at a discounted price. I met Miranda in Stroud for lunch arriving at the small town of Stratford and setting up camp in a rest area adjacent the town cemetery. We headed to the closeby town of Gloucester and relaxed and blogged in one of the pubs, restocked at the IGA before driving back to our camp for the night. During the evening an eerie glow emanated from the graveyard though an inspection in the morning revealed no possible source…spooky indeed!

A cooler and cloud covered sky saw me depart Stratford which was very welcome as I had a significant amount of climbing to do on Thunderbolts Way to reach the new England Tablelands. I left Miranda doing a watercolour of the cemetery as that was the most significant feature of our stay there. 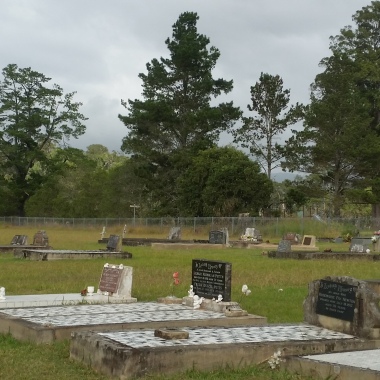 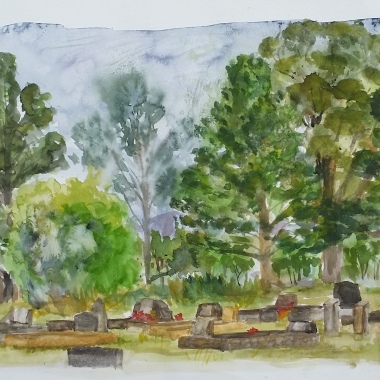 As I rode I passed a delightful pristine looking stream just before beginning the significant climb to Barrington Tops (3 km of it at 12%) through beautifully wooded terrain. Just as I reached the top two council workers called out asking if I needed water and I readily accepted their offer of a bidon full of refreshingly cool water before pedaling on to very tiny town of Nowendoc setting up camp adjacent the community hall. The whole village seemed to consist of the community hall, the bush fire brigade shed, a couple of houses and a well stocked general store. 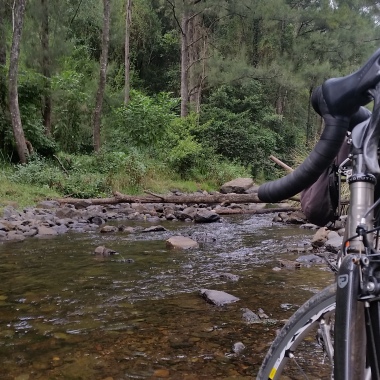 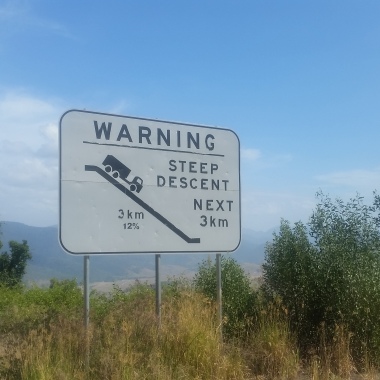 Miranda also had a pleasant encounter on her way to Nowendoc – she stopped at a newly established studio gallery in Barrington where she met the lovely Nikki and Anne Marie. Not only did they give her coffee and buy some postcards, they gifted her with a self-watering brush for her watercolours! People are so kind. 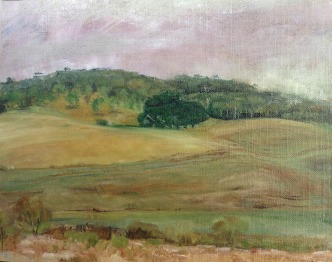 Waking to a misty morning (we are in the highlands after all) Miranda decided to attempt an oil of the mist shrouded hills. 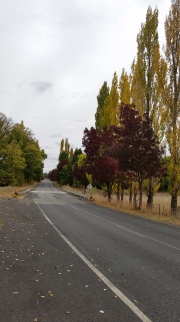 I left her to continue riding along Thunderbolts Way, passing many a beef cattle farm and admiring the glorious colours of autumn on display of the exotic trees that had been planted beside much of the road.

After crossing the Great Dividing Range (1,178 m at this point) I arrived at Uralla at the same time as Miranda. We lunched at a delightful new cafe that had an amazing pressed metal ceiling and delicious food. We then set up camp at the local van park and waited for Megan,  journalist /photographer for the Armidale Express (Armidale is 20 km up the road). She did a great story and we appeared on the front page of the Extras section of the next issue of the paper. 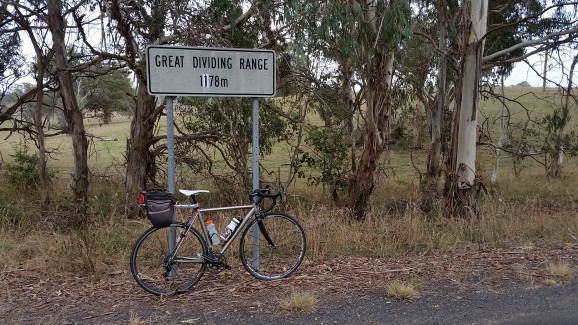 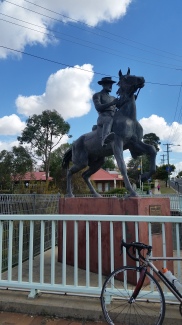 Miranda attended University of New England in Armidale in the ’80s, so it was a bit of a nostalgic stop for her. One of her mates from her uni days, Peter, still lives and works in
Armidale so we we caught up with him for drinks and dinner in the evening.

While Miranda, ably assisted by Peter, set up a stall to sell merchandise and chase donations in the main street of Uralla, I set off along the New England Highway to Armidale. From there I turned onto Waterfall Way and rode on towards Ebor. I made a small detour to revisit the Oxley Wild Rivers NP where the car I was driving was nearly swept away in a flash flood some twenty five years earlier (containing my daughters and their mother…) 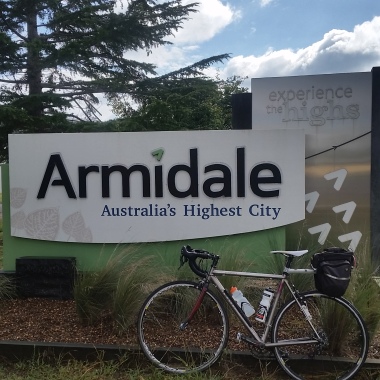 I crossed the great divide again, this time signed the ‘Snowys’ at 1,350 m. The terrain became heavily forested and just outside Ebor I turned off to look at the magnificent Ebor falls from both the upper and lower lookouts. Then I followed a bush track into town to wait for Miranda who was lunching and viewing the New England Regional Art Museum in Armidale before leaving to meet me. 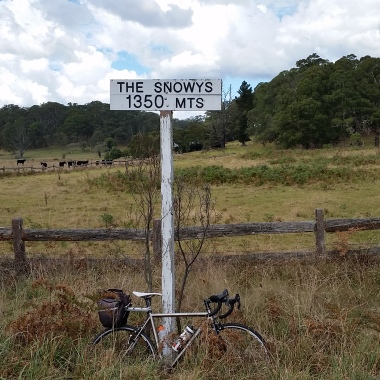 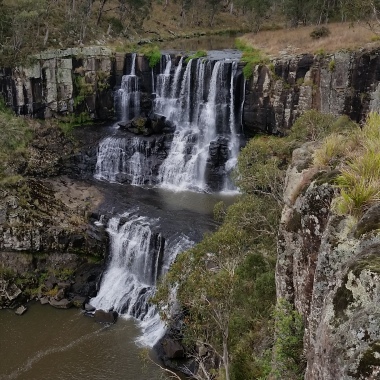 I cooled my heels at the very quaint local coffee shop/restaurant and when M arrived we drove the dirt road to Cathedral Rocks NP, our isolated bush stop for the evening. Before the sun went down we went for a 6km walk towards Cathedral Rocks through the most delightful rock and fern strewn bush terrain. The campsite was very quiet, the stars were brilliant and we lit a fire to keep warm and to cook jaffles for dinner. 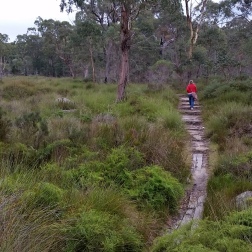 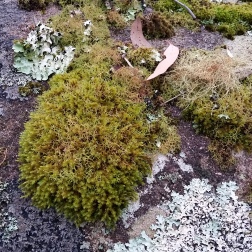 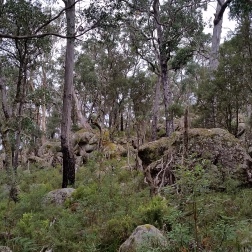 Miranda worked on a quick pastel of the surrounds of our campsite while I readied myself for the ride to Grafton which I would commence from where I finished yesterday, that is, Ebor. 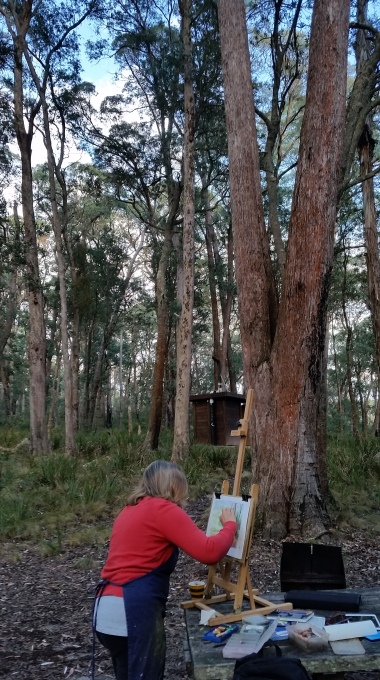 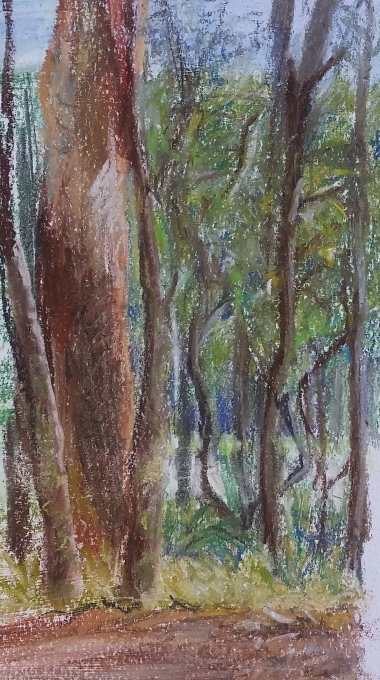 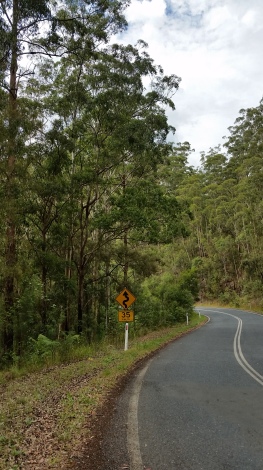 Refuelling both the car and ourselves with coffee from the quaint café it was time to ride off through the mixture of farmland and lush rainforest and enjoy using up the many meters of elevation I had in the bank from the climbing on Thunderbolts Way. We met up in the cute little village of Nymboida where we chanced on their fortnightly Sunday market and Miranda was able to set up with postcards and merchandise on a table while she waited for me. I was welcomed as I rode in by the forewarned community members (it was a very small market), had a BLT without the B made for me for lunch before back on the road towards South Grafton. We met there so we could drive the 30km south to one of my favourite places anywhere in the world, Diggers Camp, where we were to rest up for a couple of days. After setting up camp on the headland (which we were luckily able to do as it was still school holidays – not possible other times!) near town we drove to Woolli for a pub meal (pizza).

We rested up enjoying the ocean, the views, the peace and the serenity of this very special place, as well as doing a few domestic chores and collaborating on Miranda’s surf sketch of the beach…basically water soluble graphite on paper, standing in the surf allowing the waves to splash over the drawing – it was fun! We also made some delicious coconut flour pancakes – yum! It was a great break before the charge to Brisbane and the excitement of the coming Ultra Provocotore Invitational…more next post. 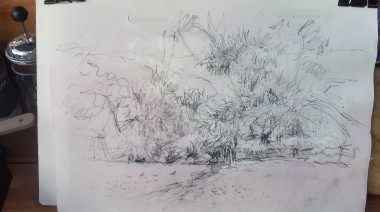 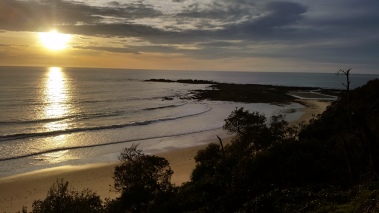