This blog is a shared thing, so sometimes it will be Steve writing the words, and sometimes me – there will be a different flavour to the post depending on the author. We also intend to do some video blogging, which we hope will be a little easier as the day seems to disappear quite quickly – this holidaying caper can be quite intense. Anyway, after that little explanation it is on with the post…

After a good night’s sleep for our inaugural evening in the ‘pod’ we arose refreshed ready for a new day. At 8am we hopped on the bikes (I am hoping to also get in some riding each day and that means Steve is doing even more kms!) and headed back out to the famed thrombolites at the jetty built for that purpose. They appeared completely different from yesterday – the lake was much calmer, the water much deeper blue, no foam and everywhere we looked were cute little Christmas spiders in webs over the path and in amongst the reeds. As one of the things I want to do is to collect sediments to possibly use to make my own oil paints, Steve hopped down and chipped off some of the colourful clay like substrate that the reeds grow in and which seems to merge into the thrombolite structures – really fascinating stuff. I took more photos to compare to yesterday’s batch and after a happy half hour we decided to head back to camp – but wait, a couple of hundred metres up the road I realised I had left my cycling gloves behind, oh no! So we returned, but most mysteriously the gloves had disappeared! We searched high and low to no avail – and as you can see from the photos, black gloves should have been obvious in that landscape. Ah well, one of the great mysteries that shall never be resolved!

Despite that misadventure we were able to pack up and head off to Bunbury by 10.30 am. As the weather is unexpectedly cool it isn’t too bad for Steve to cycle during the middle of the day – of course, this will not last, the Nullarbor beckons after all! While I had thought it was going to be a really easy day for him as it is only 70km to Bunbury, Steve chose to detour to Preston Beach on the off chance Auntie Marg and Uncle Jack were in residence at their beach house – alas no, but it did mean he rode 100km for the day, landing at the Koombana Beach Caravan Park by 2.15pm. He found it a much easier day’s riding.

Meanwhile I had coasted in around 12 noon. There is this somewhat draconian attitude at some caravan parks that you may not check in until 2pm – it seems very odd that they are reluctant to allow you onto a piece of grass early…but happily this time they were amenable to allowing me to settle in ahead of time. Next problem, backing the little yellow thing into place. Hmm. I half-heartedly attempted to, thought better of it and went in search of assistance. I did not need to look far, the lovely Bruce from Tamworth was very happy to help and got me backed in and able to unhook the station wagon so I could go in search of nets to go over our hats – the flies are endemic this year and while I knew they would be a necessity at some point, we were not quite prepared for it so soon. That and a few other little chores filled in the time until I realised Steve had arrived – the Spot tracker is a great thing and I can check on him at anytime so long as there is data coverage. If anyone is interested in following his progress on the spot checker just email and we will send the link.

Jobs done, campsite set up, time to get a drawing done as part of my bid to document this journey through art. As I had driven into Koombana Bay I spotted a sign to a Mangrove board walk, and thought that would be a good subject. I must say I hadn’t quite anticipated the challenge of deciding what to draw or paint each day – so many options, so little time! The challenge each day for Steve is to find scenic and unbusy roads/paths to ride, for me it is to settle on a suitable view to attempt to interpret through art. As it turns out, the mangrove was a good choice given that it is reputedly the most southern mangrove system in the world – I will research it further once back in Perth and ready to work up ‘The Exhibition’. It was a lovely little boardwalk and mangrove system and I managed a fairly quick graphite sketch, and took reference photos to use in the future. No sediments this time – too watery. Also my plan to record the sounds of various environments has yet to be realised, but we have time after all! 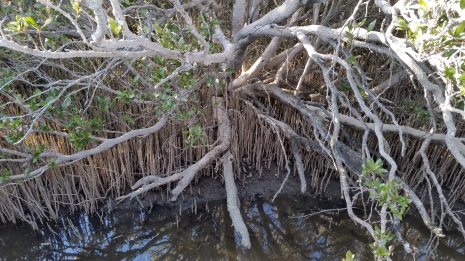 The evening saw us sharing a meal with daughter Katie’s beau Michael and his mother Brigid – a lovely evening, but by 9pm we are knackered and must head back to the pod to prepare for another day (which includes doing these posts, but we are a little slow on them so they won’t be quite timely, but hey, we are on holidays!) Tomorrow we head for the beautiful surfing spot, Yallingup Beach.

One thought on “Day 2 Lake Clifton to Bunbury”