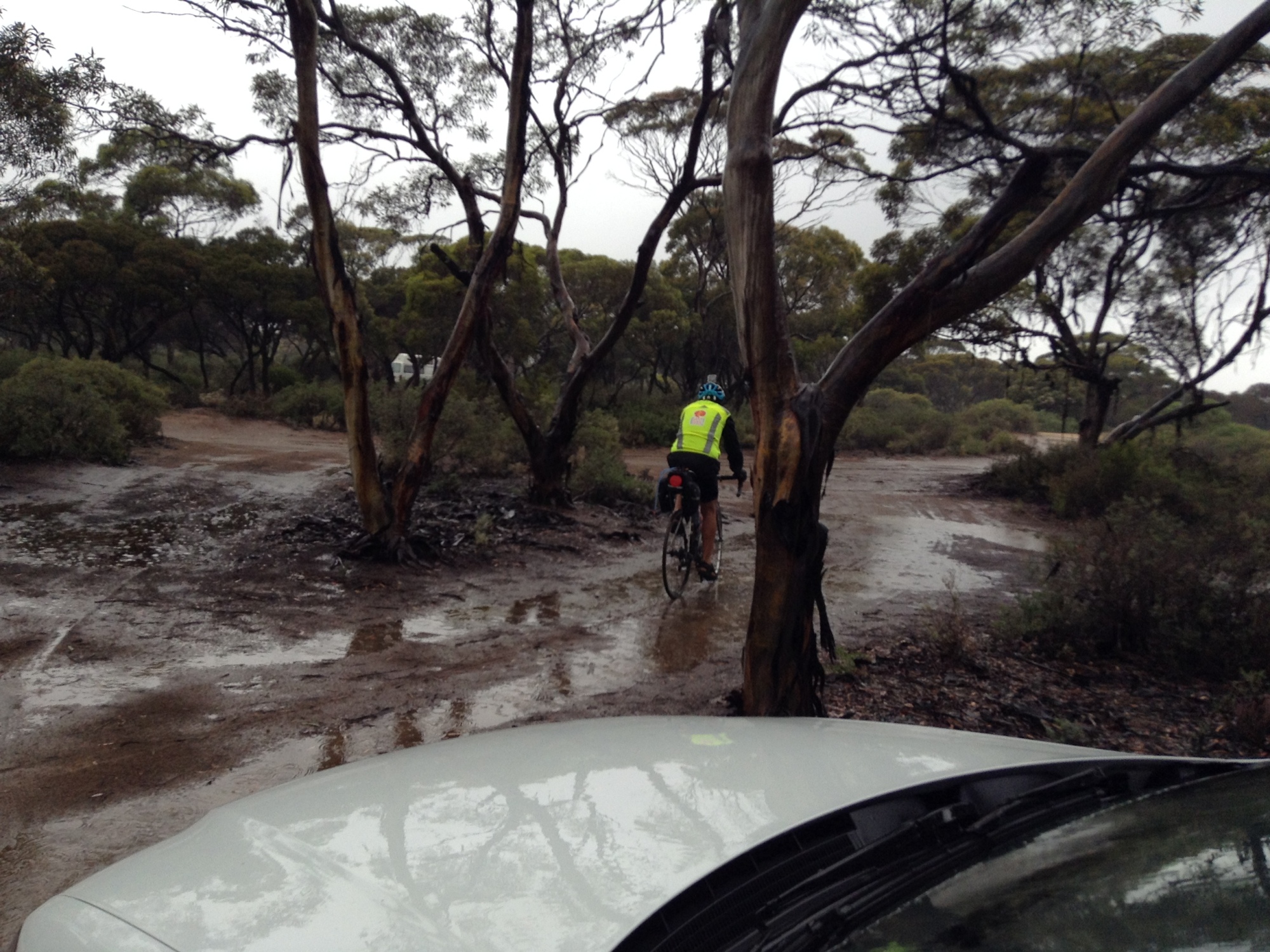 Today started out pretty wet. It had drizzled all night which may have played a role in a restless night for both of us and we awoke around 5 in Central Western Time, which is midway between the Perth and Adelaide time zones – we’d never heard of it, and as it only goes for about 600 km, we decided (along with Telstra) to just ignore the 45 min change.

We had already decided the night before that we would breakfast at the Mundrabilla roadhouse just 10km further along the road, so we packed up in the rain and headed off, Steve on bike, me in car with van. We met up at the roadhouse and sat down for a big brekkie to fuel us both for the day. It was OK, apart from the whinging toddler at the next table.

Once Steve had headed off towards Border Village I chatted to the very friendly staff to determine a good subject for the day, but as it was pretty miserable with the rain I elected to get out our Nikon and just take photo references to assist with an artwork done from photos rather than for life – the first time on this trip. I was also a little concerned about Steve as he was feeling pretty fatigued after another eight days on the road with pretty tough conditions (though not as bad as we anticipated as the temperatures have been in the mid 20’s mostly). So after a half hour juggling umbrella and camera trying to get good shots of the quite beautiful shrubby plains with the what we think must be an old coastline in the distance (there is a long range of hills – around 200km between Madura and Eucla, with the plain stretching to the coast) I set off with the intention to leap frog Steve to make sure all was well. 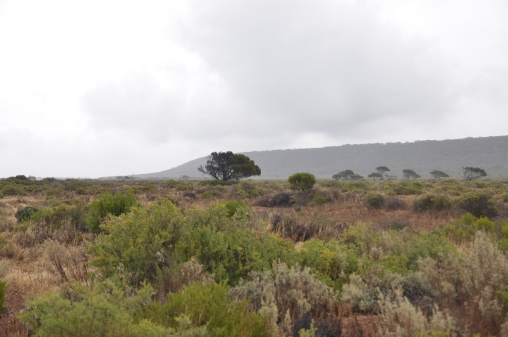 First stop was about 30km along at a truck rest stop. I filled in my wait with more photography until Steve arrived to check in – all good, so I headed down the road another 30 or 40 km. I thought I might draw one of the gnarled trees while waiting, but it was all too difficult with the car misting up, and it being a bit awkward squished in the driving seat. Once Steve had checked in again I continued on to Eucla. What a lovely spot – I was quite tempted to change our plans and stay there, especially as they had real coffee on offer! 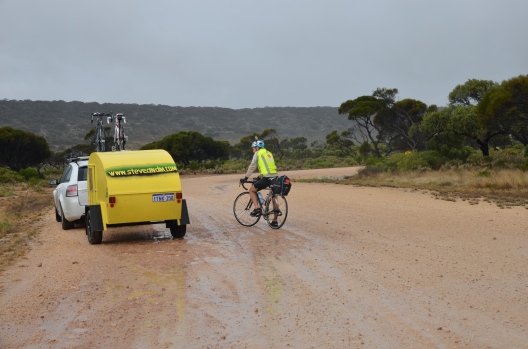 Heading into Eucla you ascend back to the height that you had been on before Madura, meaning that there is a great view across to the ocean from behind the Roadhouse and accommodation. It was still drizzling though so my thoughts for attempting some art were scuppered. Instead I bought a coffee and muffin while I waited once more for Steve. As I walked out of the snack bar a woman ran over to me and asked if I was with the cyclist – she had read our decals on the car, and had seen Steve as they travelled. She told me she had just lost her dad to a brain tumor and wanted to make a donation. It’s moments like this you feel so touched and humbled that you can make a difference for people. 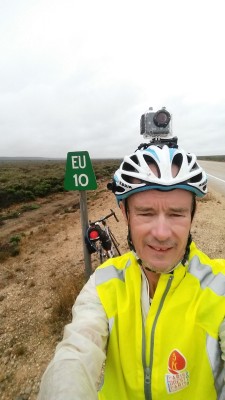 I also met a couple returning to the east coast after four years in Perth working. In that time they had gained a few grandchildren so were looking forward to returning to old haunts and family in the east. They had seen Steve on the road also, so were interested in our quest. As we chatted Steve rode in, a little worse for wear, but ok. I got him coffee, chocolate muffin with cream and the good wishes of the staff at Eucla. Only 12 km to go and we could stop, set up camp and put our feet up for a few days to relax for Christmas.

I’m glad we resisted the urge to stay at Eucla, nice as it looked. When I arrived at Border Village, as usual, I took in some leaflets to leave at the front desk. After quite a few stops without any offers to assist by waiving fees I wasn’t expecting anything different here. Well, I was in for a surprise. The manager Geoff, lovely guy, as soon as I asked about leaving the leaflets said, ‘Hang on, I think we can sort something out for you,’ – that something being three days at a powered site for free to support us. Wow.

So I went and scoped out a good spot just in time for Steve to arrive. Great, we set up and then went back to the Roadhouse to see if we could top up our supplies. Wow again. Travis, the chef, not only wanted to make a substantial donation, he supplied us with fresh veggies, bread, cheese, milk and ice on him! He had a brain injury some years before and was keen to support us however he could. Again we felt quite humbled by the generosity of those we meet along the way.

Back at camp Steve got chatting to another camper, Russell, formerly in the military, who was both interested and supportive of what we were doing. He had some pretty good ideas for who to contact for help with fundraising, and offered us assistance for when we get up Newcastle way in NSW. He also had some special cream that he gifted to us to help with aching legs etc. What a champ.

That night Steve cooked up a fabulous lentil dhal in the Thermomix with our veggies from Travis – a delicious meal to end a rather long day. The skies had cleared and we looked forward to a restful couple of days of fine weather and good cheer.