After a hearty breakfast I left the Nullarbor Roadhouse about 9am while Miranda set up to paint a gouache of the view to the south east from outside the roadhouse snack bar, similar to the work from Cocklebiddy. 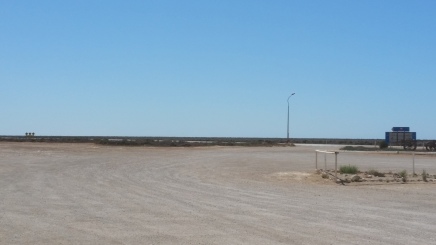 I turned off to the Head of the Bight about 10km down the road for a 25km round trip detour. It was certainly worth it, even without the whales, as the views were amazing. It is the point where the cliffs to the west end and sandy beaches to the east stretch out as far as you can see. 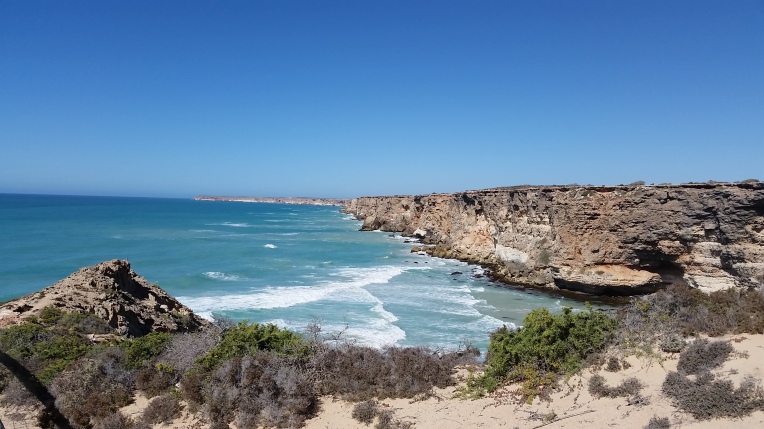 Miranda caught up with me about 40km from Yalata and we shared some more panettone with raspberry jam for second breakfast. She was thrilled that one of the roadhouse staff, Fran on a working holiday from Bavaria, asked to buy her painting when she had finished it. She is particularly happy when a work goes to someone that it holds meaning for as it will have a sentimental attachment as well as hopefully artistic appreciation. Fran had already bought some postcards from M the day before – nice for her to have a fan.

The riding conditions were much better than yesterday, still a head wind but not nearly as strong, I felt much more comfortable.

Within 50 km, and almost in the blink of an eye, the treeless Nullarbor plain was gone, the landscape changed to wooded country and there was real terrain, corners and undulations: the transformation is amazing.

I arrived at Yalata which is an abandoned roadhouse and caravan park and there was no sign of Miranda. Quick check of the phone revealed she was parked in a rest area 5km down the road as she felt the abandoned park was a bit too creepy. I agreed, it was rather spooky.

The day had warmed considerably, so after making camp we sat inside the shade of the pod spraying water on each other to cool down. I had another bush shower which felt fantastic.

After eating dinner and viewing another magnificent sunset, it was time for sleep.

There was a bit of a kerfuffle at about 4:30am when a truck drove into the ‘no trucks permitted’ rest area and had to wake the occupants of a campervan so they could continue back the highway. I don’t think they were too happy being disturbed so early.

Another rest area tomorrow near Penong, bit of a test for the battery and solar panel; it will be the longest period we have gone without any mains power.