A new experience for us (apart from every day being a new experience!) – two nights in a row at rest areas that have sparse (if any) facilities. Yalata and Penong could boast only rubbish bins, and various insect predators: ants, March flies, ‘sticky’ bush flies and mosquitoes being the principle protagonists. In some ways we really enjoy these stops where we are completely isolated from civilization – so much so we don’t even make efforts to chat to any other campers that are making use of these free campsites.

As usual Steve was up with the sun (actually even before the sun, and the moon was still up!) and preparing us for the day: breakfast, pack up car and caravan (apart from table and chairs as I make use of these for the daily artwork) and hooking up the caravan ready for my departure later in the day. Coffee and muesli with fruit (strawberries, blueberries and sour cherries for my arthritic fingers are the usual mix) and greek yoghurt is standard, though some mornings I like Steve to have a big fry up of mushrooms, vegetarian sausages, eggs and fried tomato with toast, especially if it is to be a long day. 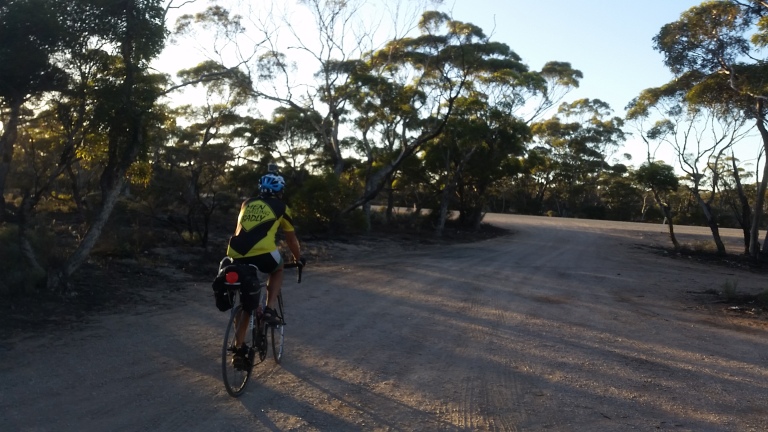 He departed relatively early (7:20 am) as the temperatures are creeping up again, though the wind has dropped off. Meanwhile my chosen medium for the day is Conte crayons: sanguine, sepia, black and white. I tried to set myself up to take advantage of the morning shadows to add interest to the drawing, whilst not looking directly into the sun. Once more I was challenging myself – another medium I haven’t used often. I guess, though, there are tactics that you apply similarly across various mediums, such as the interplay of warm and cool tones, when rendering a drawing. 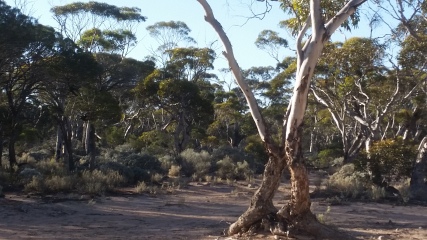 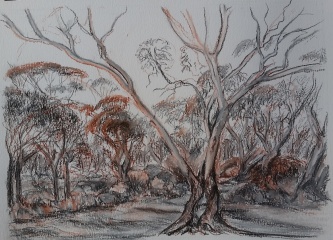 As Steve rode towards Nundroo, where we had agreed that we might meet, about 45 km and a couple of hours for him down the road he spotted a few interesting sights: yet another piece of clothing artwork, this time a tree dressed by a couple on tour from Tassie and  a bill board which had its own take on the roadside memorial – he hasn’t taken many shots of the more traditional crosses and flowers as there are so many and he is thinking they may be the subject of some future trip as he is sure there is enough material to write a book based on these sad monuments, mostly to young adults. 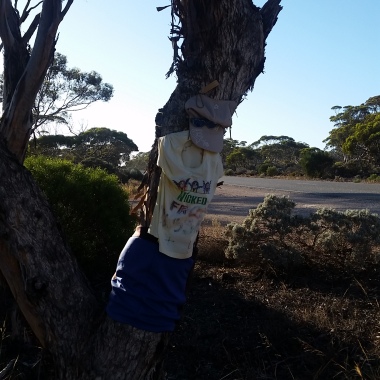 I was keeping an eye on the time as I drew, or so I thought,  when the phone rang – “I’m at Nundroo, are you on your way?” “What? I just looked at the time and it was only a bit after 8:30, how did you get there so quick?” “It’s 9:30, when I expected to get here, look again,” He was right – that’s what happens when you’re making art, time just disappears! Anyway, he kept going as it was best to keep moving while it was still early. I decided it was time to pack up anyway as that takes me about half an hour and get on the road.

A quick stop at Nundroo to refuel, stock up on a few essentials (beer, baked beans and ice) at the small shop and bar the town boasted and I was away looking out for Steve. The landscape changed again, this time to sweeping wheat fields with very sparse vegetation – not great for a hot day’s ride. The abandoned houses dotting the landscape indicate the area has become marginal. Today’s trip was 110 km, and with more favourable winds he was much further along that I had expected, about 20 km from the rest area on the western side of Penong. 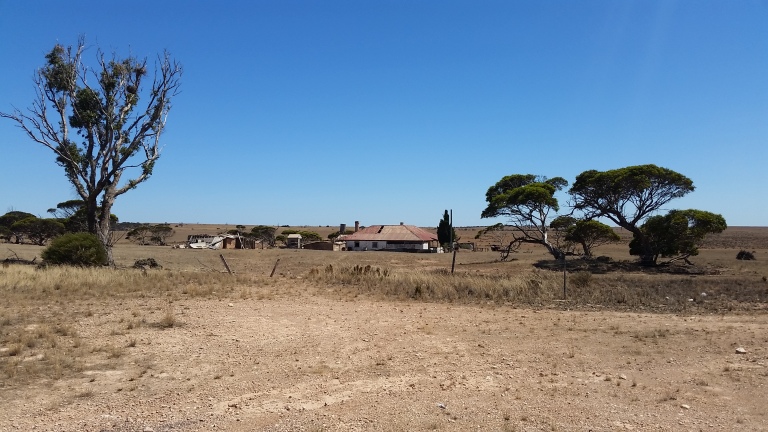 As I approached he waved me on – I wasn’t certain if it was because it wasn’t a great place to stop or because he was fine without a break. So I drove on a short way to a better stopping point, watched him stop and take a photo of some Christmas installation before he rode up beside me to say it was too hot to stop, just keep going and he would meet me at the rest stop.

While the landscape remained largely the sparsely treed wheat fields, the rest area did offer some shade, but it was hot! And the flies! It was necessary to don the fly net over my hat again while I waited impatiently for Steve to arrive. I had a plan – once we were set up with the caravan unhooked and solar panels pumping watts into the battery we would head to Fowlers Bay and the Beach which was about a half hour drive away.

It was a good idea, Fowlers Bay proved to be a beautiful spot with a long jetty, great little café/shop and lovely beach that had the most interesting sculptured ledges of seaweed that had washed up and dried on the shore line. So instead of a hot, dusty, fly ridden afternoon in a deserted rest area, we had a lovely lunch with chocolate thick shakes and refreshing swim and relax on the beach.

Fowlers Bay is named after one of Matthew Flinders crew on his trip around Australia and a plinth and a few information boards on the beach got us up to speed on some of the history of the area. A very popular spot for fishing, as are many of the coastal areas in the Eyre Peninsular. After our pleasant afternoon we returned to the rest area to cook up our remaining vegetables so that we wouldn’t be throwing out too much when passing through the check point at Ceduna the next day. 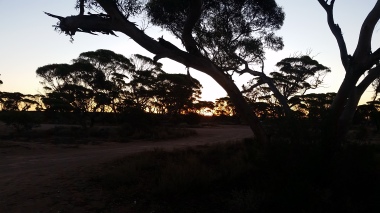 This time we both used the solar shower, relaxed in the pod as we watched the beautiful sunset over the wheat fields and drifted off for another night’s peaceful sleep. Our sojourn across the Nullarbor was nearly at an end.