Today marks the end of the Nullarbor sojourn – we made it! Not nearly as difficult as we had anticipated nor as hot, though the winds mostly were as expected. While today and and yesterday were pretty warm, as were the two days before Norseman, I have been lucky to avoid what many further east have suffered during the time we traversed the the Nullarbor.

The forecast maximum temperature for the day was 39 degrees in Ceduna so we rose early, 5 am central daylight saving time. Our body clocks still seemed to be on Perth time, so it felt more like a 2:30 am awakening. Thankfully it was a relatively short day at 92 km and with a very pleasant favourable breeze (7 -9 km/hr NW) so I finished in good time and well before the hottest part of the day. 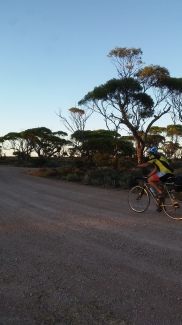 After eating a lovely fry up prepared by M and packing up our camp I was on the road and heading eastwards before 7 am. M stayed at the rest area to paint a watercolour of the paddock of wheat stubble just behind our camp spot. 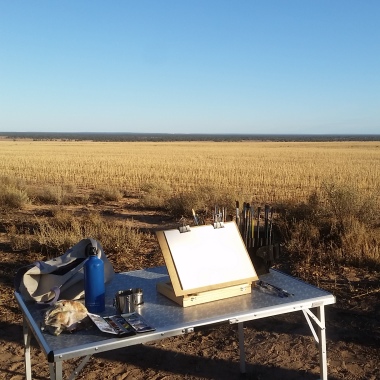 I was in such a hurry to beat the heat it appears I only stopped to take one photo: a view looking back down the hill to the township of Penong. Arriving here was significant because Penong was the first real town, small as it was, we had seen since leaving Norseman 11 days ago.

I texted Miranda to take more photos so I could rush on to beat the heat. 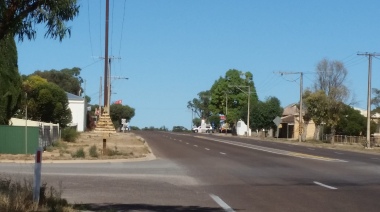 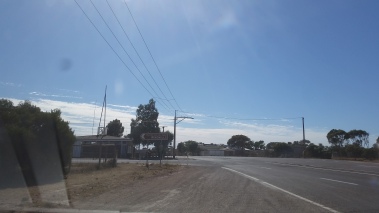 I arrived in Ceduna after passing uneventfully through the agricultural check point well before M and checked into the Shelly Beach Caravan Park where we received a free upgrade to a powered site from the manager as a donation to our fund raising.

Once M arrived, we set up camp and adjourned to the air conditioned comfort of the Ceduna Hotel to cool down and catch up on our blogs before doing some much needed food shopping. Ceduna had the first proper supermarket we had seen since leaving Norseman. 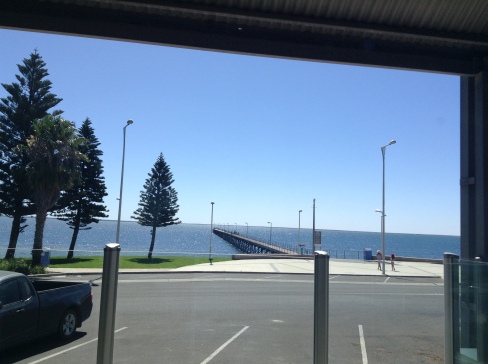 Before we left the pub, M drove to the local seafood supplier to buy some prawns. As she chatted to ‘Baldy’, the proprietor, he asked about he bicycles on the top of the car – of course she explained what we were doing, and quite unexpectantly he handed back the payment to put towards the cause. It was a lovely and generous gesture, so if you are ever in Ceduna, head over to the seafood factory and support Baldy. His wife had passed away from breast cancer seven years previous and his sister has been battling breast cancer for the past twelve months….almost everyone we meet has a touching story to tell.

Later in the afternoon, when things had cooled down a little, we hiked to the beach for a paddle and to take some photographs. The patterns made by the sand banks were fascinating and shelly beach certainly lived up to its name. 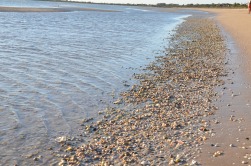 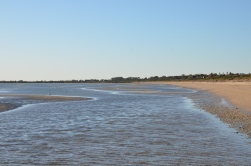 We trekked back to the pod (it was about 500m up and down sand hills to get there) and gathered the ingredients for the evening meal, prawns for M, pasta for me, which we prepared in the camp kitchen. Another fella using the camp kitchen was cooking up a huge pot of scallops he had collected half an hour earlier from the bay, what a place!