Hello 2016! We started the year quietly – it was cooler, and in the morning not so windy, but it picked up and was howling again by the afternoon and into the evening. We took advantage of having a couple of days up our sleeves to catch up on some of the mundane chores like clothes washing and sorting out gear in the car and van. 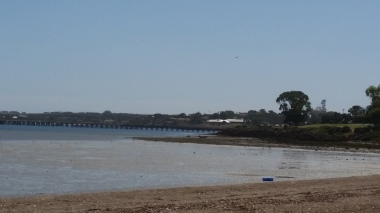 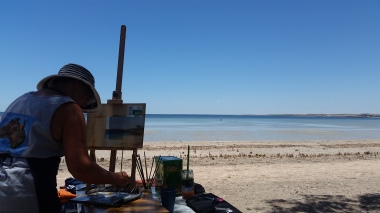 It was time for another oil painting so the morning was spent on doing the view across the bay towards town and jetty from our campsite. Yet again it was dropped – this time in the sandy dirt. The idea for collecting pigments to create oil paints with has taken on a whole new meaning – these paintings are really responding to the environment they are made in. 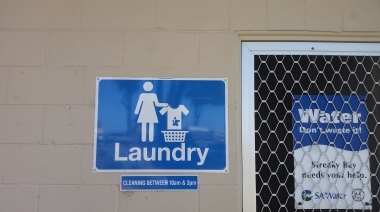 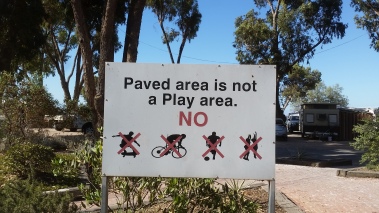 The afternoon was spent in the air-conditioned rec room that this well-appointed park has, though we were somewhat non-plussed by some of their signs: apparently only women wash clothes, and we were puzzled by the banned activities on the other sign – is it no dancing do you think? As we sipped Rose bubbles we worked on some blog posts. It seems to be a constant catch-up – we think we are getting on top of it, and then we are a week or more behind before we know it. Oh well, it will make a great record of our adventures on this trip, and then there will be the book (yeah, sure). 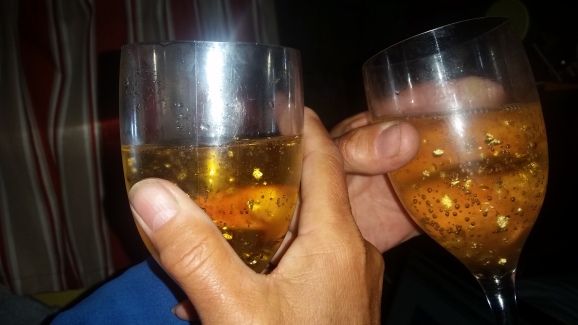 Time seemed to disappear and we realised it was time to eat and retire, but not before more blogging! We decided to indulge in the gold chardonnay as we blogged away and to welcome the New Year a little late.

Jan 2: We had organized a trip to Baird Bay, about 50 km away, to swim with the sea lions and had to be there by 9 am, so an early start and on our way. What a treat! Despite the fairly rough conditions, once we were out in the bay and anchored at the small cove that the sea lions enjoy hanging out during the day, it was fairly calm.

We were fully suited up and together with about 10 other participants and the guide, jumped in the water and swam around the boat. There were many sea lions on the beach and gradually several lumbered out into the sea and swam around. The younger fellas put on quite a display playing with each other, jumping and diving, chasing each other and swimming around us as they played. We had plenty of opportunities to get up close and occasionally get a nose butting our hands. 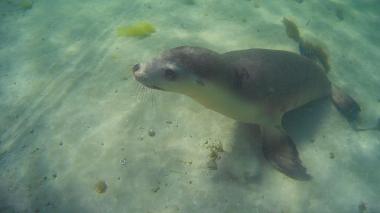 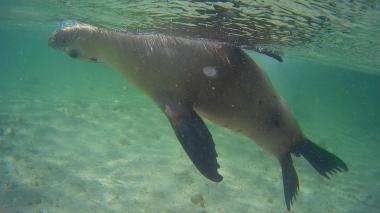 Usually there is the opportunity to swim with bottle-nose dolphins also, but they were not out to play on this occasion, so after quite a long time searching for them it was decided a no go and we headed back to port out of the water which was getting rougher and rougher as the day wore on. The proprietors had cancelled the afternoon session due to the forecast strong winds.

It was a great experience, and wonderful to see the extraordinary landscape of this area. We were however, pretty exhausted. When we got back to Streaky Bay we opted for a delicious meal at M’Ocean on the waterfront before returning to camp and relaxing for the afternoon.

Our stay at the bay was characterised by the winds and dust – it wasn’t hot after the first night, but we felt somewhat battered by being blown about. We cooked in the camp kitchen to escape the winds and mentally prepared ourselves for getting back on the road the next day.

…to you all, we sure hope that we are providing some entertainment with this blog, please let us know :).  May 2016 be a wonderful year for all our friends and supporters. And folks, don’t be shy of giving us a call now that we are back from the wilderness, we would love to chat – just occasionally we’d like to hear a different voice that we know!