We spent a warm and cosy night in a large caravan and annex at the Riverbend Caravan Park that we decided would be a good choice given the unseasonable cold and rainy weather we were experiencing in Denmark, and wanting to ensure Vinnie had a comfortable start to his holiday with us (especially as it was his birthday!) As usual we arose early to prepare for what would be a rather long day in the saddle for the boys.

We kept eyeing the skies, and groaning with each shower, but as the morning progressed they eased to light sprinklings and by the time they left just before 9, we were hopeful that it wouldn’t be as cold and unpleasant as the previous day for Steve. After they left I wandered down to a rotunda in the grounds to do my daily artwork under cover. This time a charcoal drawing of the old weir and river banks. Needs work…will post more artwork pics after I get the chance to work on them when we have a break from the daily grind of moving on each day. We have four days in Esperance to regroup and catch up on blog posts, work more on the daily artworks and generally relax.

on the road to stirling ranges

on the road to stirling ranges

After an hour and half I’d done enough so checked the boys progress on the Spot Checker – OMG how did they get so far, they were way further than I had anticipated and I still needed to get back into town, do some food shopping and meet up with them on the road to supply lunch. I thought I would have about three hours before they got to Mount Barker which was around half way, but they were within 15-20 km by the time I was ready to get on the road proper.

Happily for them they had a howling south-westerly pushing them along, and despite a bit of rain, had made great time to Mount Barker where they stopped for a milkshake and coffee. I managed to catch up with them about 15 km out of town. Pulled up on the side of the road and made sandwiches for lunch – it was still rather chilly and we all rugged up to eat.

Once again the boys hopped on their bikes and I had instructions to check out Woodgenullup North Rd to assess whether it was suitable for the bike. Whoops, missed the turnoff (well it turns out the Woodgenullup consists of one old stone cottage – I had assumed it would be obvious when to turn because I’d be at a town, but no..).

By the time I realised that I had missed the turnoff they had already started on what turned out to be a rather corrugated and tough going dirt road. Despite Steve suggesting they turn back, Vinnie insisted they continue, perhaps not his smartest decision as it was pretty tough going for those 24 km and then there was still another 24 km after that to reach the final destination (and much of this uphill!) 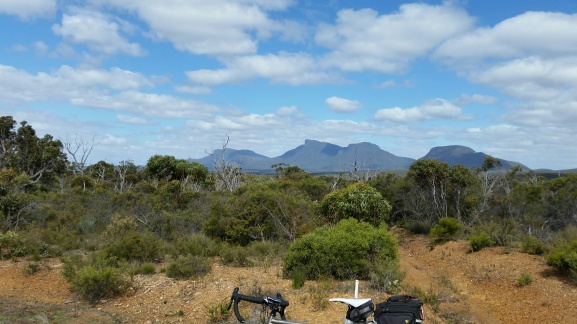 Meanwhile I continued on to Stirling Ranges Retreat, our stay for the evening. I arrived around 1:15, they were still 2 hrs away. I filled in the time by finding a good spot to set up, checking out the Bluff Knoll café and trying to get some reasonable photos of the ranges that provide some spectacular mountain silhouettes as a backdrop to the beautiful flora of this area. Just before I arrived I spotted an emu dad and half a dozen chicks, but wasn’t quick enough to get a photo.

Finally they arrived, a great effort by Vinnie who is a little out of condition, but was determined to keep going. Very proud of him. The park owners and manager were very interested in our project and our caravan – they were incredibly helpful and made our stay very enjoyable. We cooked dinner in the camp kitchen, chatting to some bird watchers from Canada (now they carry some serious camera equipment!) and a group of young physiotherapists from France and Spain who are hoping to spend six months in the south-west as they love the area so much.

By the time the sun is down it isn’t too much longer before we are ready to crash – the days are full and exhausting, we don’t seem to have too much down time in between cycling, art-making and blogging each day, but so far it’s a great adventure and we are loving meeting the variety of people that come our way.